The Depths of Hell

While fishing near a lake, Kirito encounters Nishida, an old man and a network security manager who oversaw the game’s development, who claimed that despite honing his fisherman skill, he is unable to create delicious dishes with it. Kirito then invites him to his home for Asuna to cook the fish he just caught for them. During their meal, Nishida mentions a huge fish he tried to catch many times but failed, thus he asks Kirito to help him. Nishida manages to hook the fish and gives the rod to Kirito to pull it away. The fish is revealed to be a huge monster whom Asuna slays. Soon after, Kirito receives an message from Heathcliff, and upon meeting him, they learn that a scouting party was trapped and killed in the 75th level’s boss room, thus a team of players from several guilds is being assembled to confront it. As the time for the battle approaches, Kirito asks Asuna to stay behind fearing for her safety, but Asuna refuses, claiming that she rathers to die than to live without him. She also mentions that all players’ real bodies must be currently being treated in hospitals and their condition can not be kept indefinetly, thus fleeing to live by themselves inside the game is out of question. As the players enter the boss room, they are confronted with “The Skull Reaper”, a powerful monster capable of killing players with one blow. Kirito, Asuna and Heathcliff confront the creature head on while the other players attack it from the sides. 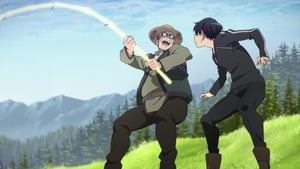 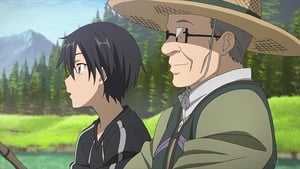