Calum has made Mercer some tea. Problem is that it’s burned and totally lacking in nutritonal value. So off they go to the supermarket. Calum is amazed Mercer knows so much about cooking.

Lenny appears and Mercer’s heart sinks. He gives Mercer his next assignment. He must kill a violent criminal just acquitted of the murder of a young woman, Marie Greene. His name is Scott Glover.

Mercer finds him at a hotel and prepares to kill him in the gentleman’s toilets. But his plan is fraught with problems. One of which is that a dogged and brave reporter knows more than he should about the case. 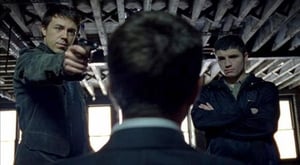