Despite the suffocating 115-degree heat and a lack of clean drinking water, Sledge, Leckie and the other Marines confront the highly-fortified enemy as they attempt to capture the Peleliu airfield. After seeing his comrades badly injured, Leckie himself is wounded and evacuated from the island. Sledge witnesses the shocking truth about what is sometimes required to survive and fight another day. 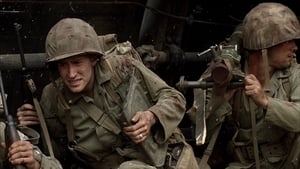